The Disturbed Disturbing Me 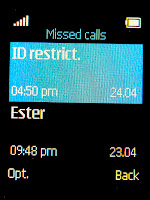 For a long time now, I have received clusters of anonymous calls -- silence on the other end of the line, or breathing, or background sound. It is a person or persons, not a machine. I may know who it is, but "I may know" isn't much use. People have said, Don't concern yourself about it, just pick up the phone and put it down again, if it's anonymous. Yet these calls disturb me. Whoever it is, it certainly isn't normal. It is the disturbed disturbing me. OBSERVATION: I could change my number, but multiple websites are attached to it. Neither the police nor the service provider will look into such cases, unless they want to. It is an earlier photo of an anonymous call.
at 12:10 PM