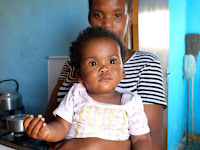 A major problem in South Africa is single mothers, often teenage mothers. Not only do they find it hard to cope themselves, but it deeply affects the children, and all of society. More than 40% of South African mothers are single mothers. The photo, which I took earlier this month, speaks a thousand words. OBSERVATION: It is a major issue in ministry today.  Previously single mothers in the Church have explosive views about it, and a minister often serves as a father figure, with limited time.